Surf Nazis Must Die - Anti Everything 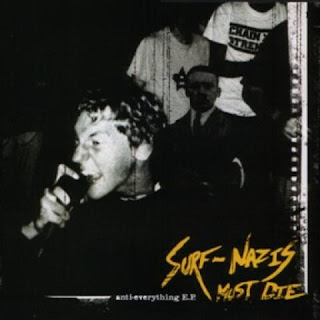 Surf Nazis Must Die was hardcore/powerviolence band from Germany.This release contains 8 great song on this release i very liked "I am angry", "Jimmy".The sound of the release is very good. They broke up, reasons cited:
“euro tour cancelled since julian´s mum was afraid her son would´nt be in bed by ten regulary. people asked for more, the band, already suffering under the strong influences of alcohol, girls, fame and exegerrated straight edge pride, decided to call it quits in order to break every little thrashers heart. check usual message boards for further information.” - myspace.com/mustdie , their myspace page.If you didn't know they formed from the ash of Adolf Hitler Klan.Members of Surf Nazis Must Die are now playing in Herpes & Nihil Baxter.I hope you will like this angry release.Cheers!!